Joint knee replacement surgery, “Why do two knees coincide together?”

Performing a stage-by-stage operation of knee joint replacement, with a spacing of each other, is more common and more popular than duodenal joint replacement in patients requiring both knee surgery.
Due to the fact that knee joint surgery is mainly done in older patients with more internal problems and weakness of physical forces, it seems that simultaneous surgery of two large surgeries with more risk is associated and therefore less favored.
Regarding the specific advantages of simultaneous total rejection in a number of volunteers, surgery was performed simultaneously and morbidity and mortality were compared with stage surgery.

Advantages of simultaneous surgical procedure
1. In the surgical procedure, patients’ satisfaction is more than a faster recovery and a return to normal life in a shorter time period.
2. In the step-by-step procedure, the time between the first operation and the second patient is in the course of rehabilitation of one knee and suffering from severe pain and discomfort in the other knee, and it is ineffective and ineffective, and therefore, with one knee surgery, it is still concerned about the long lasting course Is
3. In a step-by-step procedure from the time of the operation to the remaining life-span, it will spend some time out of its useful life without enjoying the benefits of knee joint replacement and less durability of using the joint.
4. In the stepwise procedure, the unilateral primary operation without front knee surgery causes surgical joint pressure due to the inadequate surgical operation of the knee.
5. In a stepwise procedure, sometimes due to the complications and pain of the first surgery, patients sometimes regret the second surgery, and the rest of their life will be lingering.
6. In a distance-stretch procedure, knee flexor correction is corrected in the knee, and the knee is not surgically removed, resulting in the length difference of the limbs, and in the knee surgery, sometimes, with the time interval, the amount of bone counts and thickness Polyethylene tibia and considering the joint surface can not be considered accurately in both knee joint simultaneously and so differences in two knees can sometimes be seen.
7. In concurrent surgery, in case of possible complications, the patient is still not tired of the number of repeated surgeries and psychologically gives the surgeon more opportunity to correct complications if necessary.
8. An anesthetic or spinal anesthesia provides the opportunity to perform two knee exercises in many cases, and an anesthetic procedure is better than twice and less complications.
9. A hospital for two knees reduces the cost of admission
10-Failure to prolong the treatment process leads to more psychological comfort for the patient in concurrent surgery and fewer mental problems.
11. In the same way, it is possible to use similar prostheses and sexes and sizes, and it is easier to maintain symmetry of the organs.
12. In the same way, the patient’s startup time does not differ from the step-by-step method
13. In the course of surgery, all the anatomical and pathologic information on the knee that is initially performed (such as the consistency of the side ligaments, the softness balance condition, the shape of the tibial and femoral condylomas, the possible anatomical variations, etc.), as immediate information from one side of the body The patient is provided by the surgeon to assist the surgery with a more precise knee,
And usually the problems of double-knee surgery are the same.
14. In the same way, the patient is once an intruder of his family and his family caretaker and nurse, and the probable costs of nursing at home and at home care once and less than two separate surgeries, with two times needing social and family support, and the time gap between the possibility of administration Self and personal issues will be shortened
15. The patient’s physiotherapy duration is shorter in the concurrent procedure and is reduced once for the next physiotherapy and its cost is less.
16. The time of double knee surgery due to the initial preparation for the two knees since the two knees are less than each other.
17. In a single surgical operation, tests and preliminary examinations, such as cardiovascular and diabetes control, are performed and their costs are for two operations once.
18. The use of a pain pump can be used in patient pain control in both unilateral and bilateral surgical procedures, and there is no significant difference in the degree of pain in unilateral bilateral surgery.
19 patients use simultaneous antibiotics, analgesics and anticoagulants simultaneously, and their likelihood of complications and costs can be halved due to a period of use of medication.
20. The need for referral for control by the surgeon, especially in patients in distant cities, is reduced to a period rather than two (in two separate surgeries), and the number of trips and bugs (in this regard) decreases
21. According to the laws and regulations of the Ministry of Health and Insurance in Iran, the patient for the second knee surgery costs less to the surgeon and is more cost-effective for him.
22. Some older patients do not give the coulomb the operation of the second knee and thus, despite the operation of the first knee, the rest of their life is not continued with constant pain in the knee (and the rest of the movement and activity restrictions), and the pleasure A good recovery is denied in the rest of their lives
23. Sometimes, after a knee surgery, the patient’s social, economic, and emotional conditions change in the course of two surgeries, and the patient can not be restored with double knee surgery for acceptable healing, and he has to burn and build with existing condition.
24. Possibility of concurrent surgery, sometimes the possibility of other therapeutic measures in other parts of the body, and the surgical treatment of other difficult joints, such as thighs, at another time, and the treatment of cigars and problems can be delayed sooner than knee problems.

Issues to be considered in concurrent surgery
1-Precision in the selection of patients with stable hemodynamic and no acute internal and acute problems for simultaneous surgery
2-Visits and Advice for Anesthesia and Cardiology and Internal Medicine If there is any doubt about the presence of abnormal problems in the patient
3. Preparation, injection, and compensation of lost blood and maintaining the hemodynamic of the patient during and after surgery.
4. Intra-articular trans-amine injection and the use of a sachet for 24 hours after surgery on the knee and a control gauge. Post-operative bleeding by opening the tourniquet at the end of the knee surgery or at the end of the surgery after opening the tourniquet with the surgeon’s taste.
5- Use of the iron-transfusion system, if available, to reduce the amount of transient blood transfusion from others and reduce potential complications
6-Controlled postoperative pain with injection of intra-articular marquine and analgesic pump
7. Consider the presence of ICU in a hospital with vacant capacity and care in a part with experienced staff or ICU after surgery (if necessary)
8. Attention to interest and desire and motivation and at the request of the patient (after explaining and justifying him)
9. The possibility of providing two prostheses (from the viewpoint of their economic costs of providing them) or a sufficient coverage of the individual insurance
10-Controller Drainage and joint drainage from the joint with drainage suction and early joint movement for more complete discharging of the joint, and of course, depending on the surgeon’s taste (as some surgeons do not drank and prefer the pack or blood collection)
11. Prophylactic antibiotic treatment and strict observation of the sterile conditions 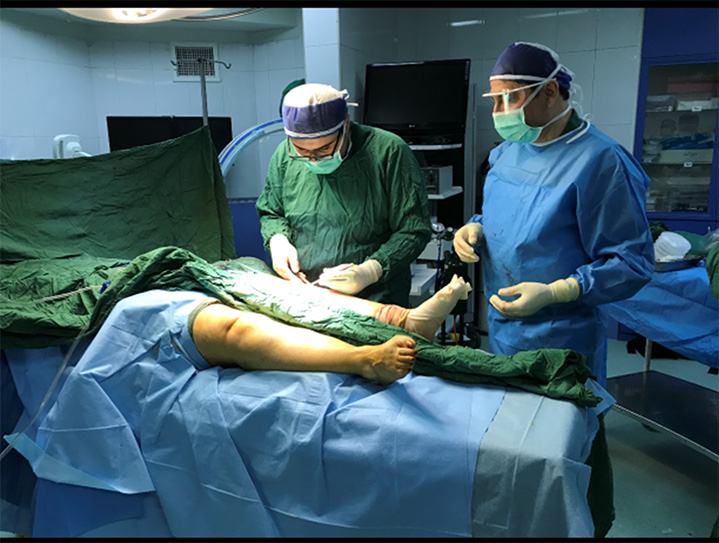 12. Replacing and using separate devices for two operations
13. Paying attention to the speed of operation and using the co-workers with sufficient speed in surgery to adequately control spinal anesthesia for two operations and reducing the risk of infection to a degree that does not affect the quality of the surgery.
14. Caring for thrombophlebitis and pulmonary embolism with the recommendation of immediate thrombosis of limbs and socks and maintaining balance in the use of anticoagulants in order to prevent thrombosis, in contrast to the occurrence of intra-articular hemorrhage that leads to increased pain and Swelling and infection
15. Accuracy in completeness and similar prosthesis for two operations in which each piece of prosthesis has a minimum size of at least two, and in some systems the left and right type should also be considered. 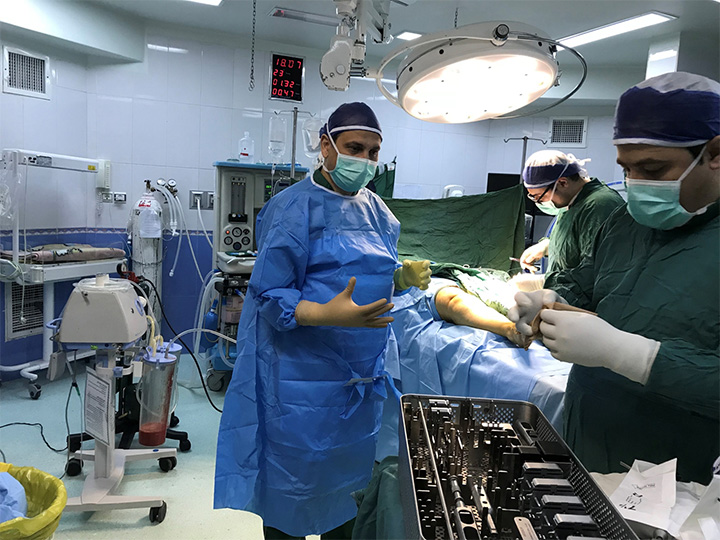 16. Rapid activation of the patient within 24 to 48 hours depending on the control of the patient’s pain and will, and his mental condition and motivation.
To prevent many of the irreversible complications such as thrombophlebitis, pulmonary embolism, joint limitation, subcutaneous ulcers, inadequate drainage of drainage, and subsequent hematrhosis and probable future infection, and faster muscle strength, and increased morale and motivation for patient collaboration to rehab with pleasure He was able to walk earlier
17-No exchange of routines,
Such as working with fixed personnel and fixed prosthesis, and a fixed prosthesis, and a hospital and one type of set, to maintain the speed of teamwork and better performance and better quality with a constant team experience.
18. Starting a physiotherapy from the day of practice and during hospitalization by the patient and his fellows with the training of measures to strengthen the quadriceps muscle and increase the range of motion with the immediate onset of knee movements
(With primary pain control) and organ massage and mechanical prevention of thrombosis and rapid onset of the patient

According to all directions, in our experience, double-sided bilateral knee replacement (versus stage surgery) has many advantages. If the patient chooses correctly and observes a series of tips, the risk of complications will not be higher and so in patients No major systemic problems are recommended